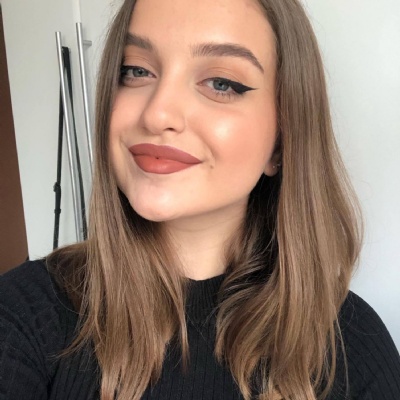 Having grown up in Valandovo with two sisters, Vesna had a lot of time to think. “I think that when people hear ‘Valandovo,’ they think of a city, but it’s really more of a rural environment. We do have a boulevard, but carriages dragged by four-legged animals use this boulevard every day.” A few years ago, her sisters found some helpless kittens on their street. “We had to take care of them, but my sisters went abroad and the kittens stayed with me. I learned about feeding and care because of them.” In this context, Vesna developed a sense of empathy which extends beyond animals.

“The one thing that I know won’t change is that humanitarian work will be a part of what I’ll do. Helping people, animals -- that’s what I’m interested in.” The seventeen year old high schooler has thought deeply about her role within the community. Even though she humbly mentioned that she doesn’t know how she’ll fit in at the College in Mostar, Vesna knows that she’ll use the opportunity to contribute to the place where she grew up. “I intend to go back home. If everyone is just thinking about going to a ‘better place’ and not helping improve things in the place where they came from, there’s really no point. My goal is to educate myself better, and to go back to the community where I grew up. I definitely intend to live here.”

The connection with the environment around her is a trait that comes out of her family context. Already at a young age, Vesna began to appreciate art. She plays the guitar and sings. She’s also interested in photography and painting, because her father and grandfather enjoyed painting themselves. “It wasn’t imposed on me, it was just an art form that was available, one that I could see… It became sort of a hobby to take photos of landscapes and paint them as realistically as I could. ” Because of this, Vesna will take visual arts along with politics and English in Mostar.

Vesna is uniquely introspective. She says that she has one flaw: “I’m not particularly open to talking to people about myself until they ask me something.” Still, she openly talked about her upcoming transition to Mostar (“even though I believe that I am well organised, I think that all of that will change as soon as I get there”), about her relationship with her sisters (“without them, I would not be the person that I am today”), and about her tendency to underestimate herself (“I’ve missed out on things that could’ve become a part of my life just because I thought that I wouldn’t make it.”)

We spent much of the conversation talking about animal cruelty. Vesna easily argued against animal testing (she mentioned that she had started developing her arguments while trying to convince her sisters) and she often goes back to her basic motivation: a clear moral compass. Vesna cares about animals, as well as about her community, “because they’re living things! It’s very simple.”